Initially called Nacimiento, the Village of Cuba was first settled on the banks of the Rio Puerco in 1736 by Pedro Barela, Jacinto Barela, Jose Sanchez, and Juan Garcia. Three decades later, a larger group of 36 settlers petitioned the governor of New Mexico Province for land which became known as the San Joaquin del Nacimiento Land Grant. The Act of Possession, signed in 1769 by Bartholome Fernandez, Chief Alcalde and War Captain of the Pueblos of the Queres Tribes, designated the grant as follows:

. . . on the North a small arroyo, commonly called the Tortuga Arroyo, on the South the commonly called the Arroyo Hondo, this to be understood as the point of said mesa toward the south which points on the west toward a small hill under the large mesa on the west, on the East side of the mountain extending from Jemez to the Piedra Lumbre and looking toward said pueblo, and on the West an arroyo commonly called the Arroyo en el Medio, which includes from north to south in the center somewhat more than four leagues, and from east to west including somewhat less than three leagues . .

The original town of Nacimiento was located east of Cuba’s current location. According to a document titled Notes of Cuba History, “the town was located on a rocky hill between Rito del Nacimiento and Rito de la Leche, a walled town with three watch towers and two entrances and a common acequia running through it . . .” This layout was required by Spanish rule, as was demonstration of proof of sufficient tillable land, grazing land and animals to sustain a community. For example, included in the original petition is the statement that there were on the tract “about 10,000 head of cattle and sheep and an abundance of horses employed in the service of our Lord, the King, whom may God preserve . . .”

According to one Spanish record, Nacimiento and other surrounding communities were abandoned within a few decades due to raids from Comanches, Navajos, Utes and Apaches. Hilario Luna wrote in his book, San Joaquin del Nacimiento, that many of the settlers relocated to Vallecitos, San Ysidro and Cañones in the Cañon de San Diego (also Abiqui), thus establishing long-lasting ties to these communities through relocation, trade and forest access.

Nacimiento was reoccupied slowly over the next 100 years, and by the 1887 census there were 238 families—primarily farmers and ranchers–living on the grant. A series of legal battles over the years left the size of the grant substantially reduced.

A church and school were invariably first priorities among the struggling communities in colonial New Mexico. The first Presbyterian Church in Cuba was built in 1889, organized by members of the Capulin and Jemez Springs churches. That church burned down in the early 1920s.

The Franciscan Sisters of the Immaculate Conception built a church on Main Street in 1915. In 1921, they built a three-story convent and school. The first Catholic church burned in 1905. It was rebuilt, and that church was demolished in 1965. The church you see today was built after that.

In the early days of education in Cuba, school was held in various homes. Young teachers from Albuquerque or Bernalillo boarded with the families and rarely lasted more than a year. They were barely older than some of the students, and some students were bigger than they were, too. Students came to Cuba from all the surrounding little communities, arriving on foot or on horseback. Those who lived farther boarded with local families and later at the convent.

The first high school graduating class was in 1936. Many former teachers remember that teaching in Cuba was especially challenging because of the large number of Navajo students who spoke neither English nor Spanish.

Mission schools taught by nuns were typically the only schools in northern New Mexico until the 1950s. A court case brought by families in one village went to the Supreme Court, which ruled that public funding could no longer support parochial schools. While other communities had an alternative to the parochial school, the Catholic mission school in Cuba was the only one until this decision forced the town to establish another school.

In 1887, a post office was established and the name became Cuba, which in Spanish means water tank or trough. The surrounding area was called laguna or lake. The town’s location made it a center for travel to the northwest from Albuquerque and Bernalillo. Cuba was the nearest town for many on the Navajo and Apache reservations, plus it served a number of small communities in the area, including Cabezon (formerly named La Posta), Guadalupe, La Ventana, San Luis, Lindrith, Gallina, Regina, Lybrook, Counselor, and La Jara. (Those communities which survived continue to look to Cuba as the main town in the local area.) Businesses thrived, including a sawmill, flour mill, hotel, mercantile, and freight hauler. One of the store owners was Eric Freelove, whose family was an early homesteader in the Jemez Mountains.

Cattle and natural resources were the driving forces of the local economy. According to an article in the Rio Rancho Roadrunner of March 15, 1980, annual cattle drives to the rail head at Bernalillo took a week. At one time, nearby mines produced copper, gold, and silver. In the early 1900s, a mail and freight route owned by the Romero brothers went from Albuquerque to Bernalillo and on to Cuba, with stops at Cabezon (now a ghost town on private property) and Senorito, site of a big copper mine still visible in the Nacimiento foothills. The logging industry was served by a rail line from Bernalillo. 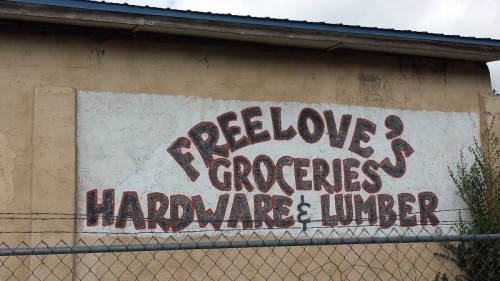 As was true in rural communities throughout the U.S., life in Cuba changed after World War II. Returning veterans were no longer interested in the simple life they had left behind. Ranching further declined as the Bureau of Land Management (BLM) instituted a system of grazing permits that limited access to allotments in the national forest. The logging industry survived longer than it had in the Jemez Valley and finally closed in the 1960s.

Land surrounding the Rio Puerco became a textbook case of over-grazing and has never really recovered. Photos taken before and soon after 1900 show a wide river plain lined with cottonwoods and other lush vegetation. Photos of the same locations 100 years later show a deeply incised stream bed and barren earth. Current measurements show that the Rio Puerco contributes 78% of suspended sediment entering the Rio Grande although it drains only 26% of the Rio Grande Basin. Numerous studies starting in the early 20th century indicate that climatic and geographic factors created a “perfect storm” that accelerated erosion in the 1870s-1890s. The extreme arroyo cutting resulted in a drop in the water table which meant loss of irrigation water for crops and animals.

Cuba was incorporated in 1964; a health clinic was opened in 1973. It is the single place to eat a restaurant meal or buy groceries between Bernalillo and Bloomfield and thus is a place to stock up on supplies for residents from miles around, as well as campers in the Santa Fe National Forest (SFNF) and hikers in the San Pedro Parks Wilderness Area. Along with nearly all of the SFNF, Cuba is surrounded by archaeological sites and is also a supply point for those going on to Chaco Culture National Historic Park, a World Heritage Site about 1-1/2 hours north on Highway 550 (formerly Highway 44).