The Clay Hotel, also known as the Esperanza Hotel or Esperanza Ranch, was demolished when Via Coeli was built across from what is now Jemez Historic Site. According to information shared by Amie Adams Green, the hotel was under construction starting in 1921, and hot water came directly from the hot springs. Patricia Bailey provided the following items from the Albuquerque Journal, which have been transcribed for greater legibility. 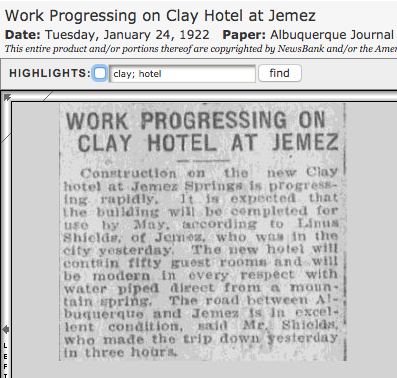 “Construction on the new Clay Hotel in Jemez Springs is progressing rapidly. It is expected that the building will be completed for use by May, according to Linus Shields, of Jemez, who was in the city yesterday. The new hotel will contain fifty guest rooms and will be modern in every respect with water piped firect from a mountain spring. The road between Albuquerque and Jemez is in excelling condition, said Mr. Shields, who made the trip down yesterday in three hours.” 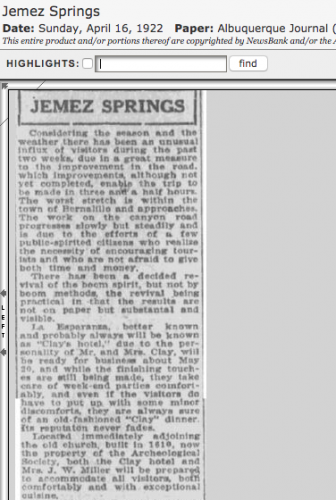 “Considering the season and the weather, there has been an unusual influx of visitors during the past two weeks due in a great measure in an improvement in the road, which improvements, although not yet complete, enable the trip to  be made in three and a half hours. The worst stretch is within the town of Bernalillo and approaches. The work on the canyon road progresses slowly but steadily and is due to the efforts of a few public-spirited citizens who realize the necessity of encouraging tourists and who are not afraid to give both time and money.

“There has been a decided revival of the boom spirit, but not by boom methods, the revival being not on paper but substantial and visible.

“La Esperanza, better known and probably always will be known as ‘Clay’s hotel,’ due to the personality of Mr. and Mrs. Clay, will be ready for business about May 20, and while the finishing touches are still being made, they take care of week-end parties comfortably, and even if the visitors do have to put up with some minor discomforts, they are always sure of an old-fashioned ‘Clay,’ dinner. Its reputation never fades.

“Located immediately adjoining the old church, built in 1619, now the property of the Archaeological Society, both the Clay hotel and Mrs. J. W. Miller will be prepared to accommodate all visitors, both comfortably and with exceptional cuisine.”